My next performances will take place at Columbia College (Tuolumne County, California) Friday, February 17th at 7 pm, and Saturday, February 18th at 4 pm; for more info see this and this.

The facebook page for the performance is here, and here is an ad that will run for the Columbia performance: 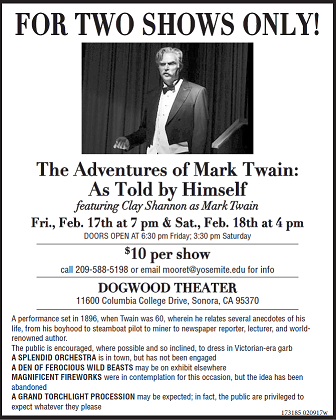 "The Adventures of Mark Twain: As Told By Himself" is set in 1896, when Twain was 60 and in the midst of a round-the-world speaking tour (recounted in his book "Following the Equator").

The performance features Twain giving an overview of his life up until then, and consists of the relating of interesting experiences and humorous anecdotes from Twain's boyhood and youth, his time as a riverboat pilot, his rambunctious and rollicking adventures in Nevada and California, as well as some of his experiences as a writer and world traveler.

I have edited a book which is a collection of excerpts from Twain's works, entitled "Mark Twain's Greatest Witticisms, Wisest Aphorisms, and Sharpest Criticisms: 50 Years of Brilliance from America's Favorite Author" It can be found here.

I have lived in eight states (Twain lived in even more, as well as other countries); in my case, besides my native California (where I was born and where I now again reside) in chronological order: New York, Montana, Alaska, Oklahoma, Wisconsin, Idaho, and Missouri. "The Wild Humorist of the Pacific Slope" and I have California, New York, and Missouri in common.

Also as Twain was, I am a writer of both fiction (for which I use the nom de guerre "Blackbird Crow Raven", as a nod to my Native American heritage - I am "½ Cowboy, ½ Indian") and nonfiction, including a two-volume social and cultural history of the U.S. which covers important events from 1620-2006 and can be downloaded gratis here: http://www.lulu.com/spotlight/blackbirdcraven

Is there a float input type in HTML5?

Where do I mark a lambda expression async?

How to split() a delimited string to a List<String>

How can I prevent the "You have mixed tabs and spaces. Fix this?" message?

From where do I import settings from previous version of Android Studio?

How can I add a hint or tooltip to a label in C# Winforms?

Why is my json file not found?

How can I allow unknown users to access my SQL (Azure) DB?

Why is it that "No HTTP resource was found that matches the request URI" here?

How do I view the full path in search results?

superuser.com
1 2 3 4 5 … 10 next
Top Answers
169
What is the easiest way to convert an Excel spreadsheet with tabular data to JSON?

stackoverflow.com
23
How to programmatically check an item in a CheckedListBox in C#?

stackoverflow.com
21
How to create dynamic ColumnDefinitions with relative width values?

stackoverflow.com
10
How to programmatically respond to Snap in Windows 8 Metro

stackoverflow.com
10
Many to Many Self referencing relationship

stackoverflow.com
8
Which IDE for Phonegap? Is Eclipse enough?

es.stackoverflow.com
7
WebApi - How to include relative paths for included App_Data XML files?

stackoverflow.com
7
Was Mark Twain a racist?

es.stackoverflow.com
5
How to hide an excel column?

stackoverflow.com
5
How to ensure that the OpenXml assembly doesn't cause a conflict with SpreadsheetLight?